So minutes, hours, days, months, and years,
Passed over to the end they were created,
Would bring white hairs unto a quiet grave.
Ah, what a life were this! How sweet, how lovely! → 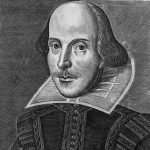 The Shakespeare Timelines, in three parts, span the lives of two English monarchs: Elizabeth I, 1533-1603, and James I, 1566-1625. Their lives encompassed the life of William Shakespeare, 1564-1616, and the publication of the First Folio, 1623. Shakespeare's writing career, from approximately 1590 to within a couple of years of his death in 1616, was divided between these two monarchs' reigns. These timelines place Shakespeare's works and biography in the context of political, cultural and scientific events that occurred just before, during and immediately after Shakespeare's life.