Cambridge graduate, small town rector and school teacher, Francis Meres (c1565-1647), won immortality through the publication of his commonplace book, Palladis Tamia, Wits Treasury, Being the Second part of Wits Common wealth, in 1598. This is the second recorded reference to William Shakespeare as a playwright in London since Robert Greene mentioned him in Groatsworth of Wit in 1592. Meres, however unlike Greene, praised Shakespeare's poetry. He also listed a number of his plays, some of which had not been published by that date. And he mentioned for the first time Shakespeare's sonnets, which Meres may have read in manuscript since the sonnets were not printed until 1609.

Meres miss-titled some plays, e.g. getlemen of Verona, Errors, Love labors lost, Midsummers night dreame. And he left out some plays we now know were written by Shakespeare prior to 1598, e.g., The Merry Wives of Windsor, The Taming of the Shrew, as well as The First Part of the Contention betwixt the Two Famous Houses of York and Lancaster and The True Tragedie of Richard Duke of York, which were published later in the First Folio as the Henry VI plays. In addition, Meres included Love labors wonne, which has never been found, but was included a few years later in a bookseller's inventory list. But the significance of Meres's references to Shakespeare are still noteworthy. First, they help scholars date some of Shakespeare's plays as well as the sonnets. Second, the passages confirm that by this time, Shakespeare, at the age of 34, was both famous and highly respected.

In addition to Shakespeare, Meres praised the virtues of several other English poets by comparing them to the great poets of antiquity, both Greek and Latin. The section of his book titled, A comparatiue discourse of English Poets, with the Greeke, Latine, and Italian Poets, begins:

“As Greece had three Poets of great antiquity, Orpheus, Linus and Musaeus; and Italy, other three auncient Poets, Livius Andronicus, Ennius & Plautus: so hath England three auncient Poets, Chaucer, Gower and Lydgate.
“As Homer is reputed the Prince of Greek Poets; and Petrarch of Italian Poets: so Chaucer is accounted the God of English Poets.
“As Homer was the first that adorned the Greek tongue with true quantity: so Piers Plowman was the first that observed the true quantitie of our verse without the curiositie of Rime.”

This introduction would not have given Meres his place in history. But a few pages later, he wrote: 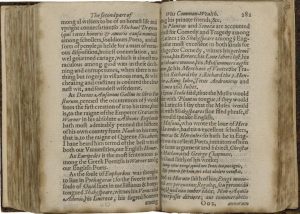 “As the soule of Euphorbus was thought to live in Pythagoras: so the sweete wittie soule of Ovid lives in mellifluous and hony-tongued Shakespeare, witnes his Venus and Adonis, his Lucrece, his sugred Sonnets among his private friends, &c.
“As Plautus and Seneca are accounted the best for Comedy and Tragedy among the Latines: so Shakespeare among ye English is the most excellent in both kinds for the stage; for Comedy, witnes his getlemen of Verona, his Errors, his Love labors lost, his Love labours wonne, his Midsummers night dreame, & his Merchant of Venice: for Tragedy his Richard the 2. Richard the 3.Henry the 4. King John, Titus Andronicus and his Romeo and Juliet.
“As Epius Stolo said, that the Muses would speake with Plautus tongue, if they would speak Latin: so I say that the Muses would speak with Shakespeares fine filed phrase, if they would speake English.”

On another interesting note, Meres also included Edward de Vere, seventeenth earl of Oxford, as a worthy playwright who wrote comedy. Some who doubt that Shakespeare wrote the plays now attributed to him point to this passage as evidence that Shakespeare's plays were actually written by de Vere. However, Meres listed de Vere and Shakespeare in the same paragraph recognising them as separate and contemporary playwrights. In addition, this inclusion deflates the Anti-Stratfordian argument that nobility had to conceal that they wrote plays for popular consumption because it was undignified. De Vere was already outed in Palladis Tamia.