Home » His Education and His Gift

His Education and His Gift

Then the whining schoolboy, with his satchel
And shining morning face, creeping like snail
Unwillingly to school →

William Shakespeare's plays and poems continue to make hungry where most they satisfy. Despite 400 years of scholarship and countless productions, age cannot wither nor custom stale their infinite variety — which explains why they are so frequently quoted and shamelessly plagiarised. 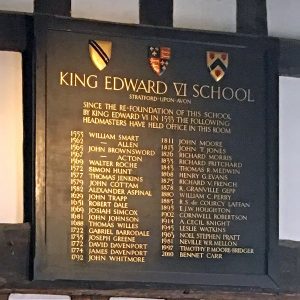 What is more difficult to explain is how a man who lacked a university education created works of such vaulting genius in a language that was only beginning to gain literary respect among scholars at Oxford and Cambridge. The early modern English language of the sixteenth century — in the absence of dictionaries, thesauruses and grammar books — was still largely unanchored by rules of grammar, spelling, punctuation and pronunciation. In the universities of Renaissance England, Latin and Greek were the languages of poetry, drama, history and scholarship.

What Shakespeare brought to his education were remarkable innate powers of observation, an acute ear for nuances of language and, of course, a particular and rare genius.

But Shakespeare, according to Ben Jonson, had “small Latin and less Greek.”  What Latin and Greek he had, he learned as a young boy at his Stratford grammar school. Scholars can deduce, based on his father's financial and civic status in Stratford and on our knowledge of school curricula in towns like Stratford, that William, at the age of four or so, entered petty school where he learned the alphabet and the rudiments of reading in English. Then at about six or seven he entered grammar school and was taught Latin grammar by Oxford graduates Simon Hunt, Thomas Jenkins and John Cottom. Through these teachers Shakespeare studied, in Latin, the poetry and plays of Plautus, Seneca, Cicero, Ovid, Virgil and Horace — all standard curriculum in the small town schools of his time. The instruction included reading these works in the original Latin, translating passages from Latin to English, and then back again. Writing original pieces in imitation of the Latin pieces both in English and Latin, and even performing these works. His attended six school days a week, four from dawn to dusk and two days ended just a bit earlier.

In that study, Shakespeare learned the music of language through the use of rhetorical schematic devices like metrical patterns, rhyme, alliteration and others. He also learned the power of rhetorical tropes such as metaphor, simile, synecdoche and many more. That education and some exposure to the traveling acting companies touring through his town formed the early foundation of his future vocation.

What Shakespeare brought to his education were remarkable innate powers of observation, an acute ear for nuances of language and, of course, a particular and rare genius. All that as well as a diligent work ethic (For a good Poet's made as well as born) and a strong motivation to make a lot of money, which he did, resulted in a body of work unmatched by any author before or since. Using the gifts he was given, he gifted us with plays and poetry that will live a very long time. Just how many ages hence his lofty scenes may be acted over in states unborn and accents yet unknown is still, unknown.